Mallorca in a glass

[Hover over pics for captions and credits; click to embiggen.]

Some of us rose early for a last dip in the Ionian Sea and found that the waves in the morning were even gentler than the evening before. Breakfast at the Mare Dei was nothing special: the usual buffet but put together without the expected care. The pastries were heavy, the fruit wasn’t flavourful and the orange juice tasted like it was made from powder. At least the coffee – based on others’ recommendations, I ordered Greek – was decent. So, a minor minus on an otherwise exceptional experience at the hotel.

We headed north on the E55. The land here is flat and rolling, mostly given over to farming. One of our group was a professional photographer looking to document the intersection between wine, food and lifestyle, and she had been hoping to find some farm fields to photograph. 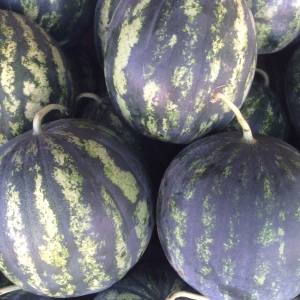 That’s why, about 30 minutes into the trip, just south of Lechaina, we pulled over at Το Περιβολι produce stand, which is run by a farmer couple whose fields, whence the produce came, stretch behind. Despite not speaking English and having to deal with customers, including truckers, who stopped to buy fruit and vegetables for dinner, they offered us slices of watermelon, probably the best of the trip, and were soon taking our camera-toter on a tour of the fields, yet another instance of the disarming hospitality afforded to visitors, especially when off the beaten tourist track. Those of us who stayed behind ogled the gorgeous eggplants, peppers, tomatoes and squashes, admired the jaunty garlands of dried gourds hung from the awning and purchased jars of the farmers’ golden brown honey with honeycomb: delicious and well worth the €5 price tag.

Back in the van, we continued northward a while then turned northeast, finally reaching the coast – here the Gulf of Patras – just past the town of Kato Achaia, then skirting around Patras, Greece’s third largest city and the capital of Achaea, before zooming past the stunning Rio–Antirrio bridge, which stretches across the Strait of Rion and connects the western Peloponnese to the mainland. 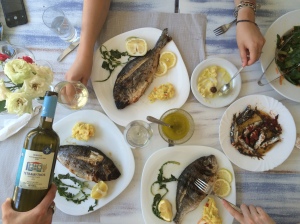 We were soon heading east on the E65 (aka the 8A), often hugging the coast, as the terrain was increasingly mountainous. Before long, just after the town of Diakopto, we left the highway and parked alongside the Gulf of Corinth in the small settlement – from what I could see, mostly a classy collection of restaurants and beach huts – of Paralia Trapezis, or Trapeza beach. We were shepherded into one of those restaurants, Ταβέρνα “Ο Μιχάλης” (O Michalis Taverna) where a long table on a covered terrace awaited us. While the meze, which included taramasalata, tzatziki, tomato fritters, grilled octopus and various salads, were uniformly delicious, the stars of the meal were the mains of stunningly fresh, grilled-until-black sea bream plated with lemon wedges and a few strands of vleeta. A series of Tetramythos whites were served, notes on which will be found on Brett happens. 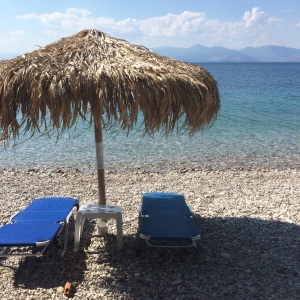 Lunch over, we were unexpectedly given an hour to change into our swimsuits, head across the street and take a dip in the Gulf of Corinth. Though it wasn’t apparent from the restaurant, the setting here is magnificent in a mountains-meet-the-water kind of way. Verdant cliffs rise steeply from the sea to rocky crags. Across the gulf, more mountains form a seemingly impenetrable wall. The beach is covered with large pebbles so smooth they’re actually pleasant to walk and lie on. The pebbles also form the sea floor as far out as we ventured and would appear not to be hospitable to seaweed, urchins or other floor dwellers. The water is a sparkling turquoise near the shore, the most limpid I’ve seen anywhere. At one point, in up to my neck, I was still able to make out the fine details of my feet nearly six feet below. The water temperature was ideal and the waves were gentle. It was the best swimming of the trip.

Fed and refreshed, we changed back into street clothes and hopped into the van for the short trip to the Tetramythos winery, heading due south (at least at the start) and directly inland on the Pountas-Kalavriton road, winding up a narrow valley between steep slopes. And I do mean up. The gain in altitude was immediate and constant and within 15 minutes we were 1,000 metres (3,280 feet) above our starting point.

Like those on the north side of the Gulf of Corinth, these mountains, which form the spine of mainland Greece and the Pelopense, are extensions of the Pindus range, itself an extension of the Dinaric Alps, which lie parallel to the Adriatic on the west side of the Balkan peninsula. Here they rise steeply from the gulf and are separated by valleys – in some cases, gorges – that run more or less perpendicular to the coast. In July, in contrast to the verdant seaside, the mountains were parched, tawny and covered mostly by scrub (a major wildfire nine years earlier had stripped the area of its pine forests, which only now are beginning to regenerate). The effect, especially when the gulf was visible through the mountain gaps, was remarkably similar to parts of the California coast north and south of Los Angeles; when I mentioned this to Tetramythos’s winemaker, Panayiotis, he replied that I wasn’t the first to say so.

We continued up the highway, a little past the winery buildings and the nearby village of Ano Diakopto before turning onto a dirt road carved into the mountainside. Had we not diverted, we would have soon ended up in the town of Kalavryta, which lends its name to one of the local red grapes, and eventually at one of Greece’s main ski resorts on 2,355-metre (7,726-foot) Mount Helmos. 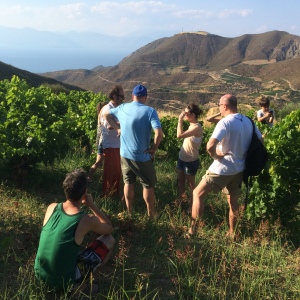 Before long we stopped on a bluff with a breathtaking view down the valley to the gulf. Around us were bush-trained grape vines, browning clumps of grass, the occasional caper plant and a lone pine tree, a square of whose bark had been stripped away to collect the resinous sap for the winery’s retsina. The vines were vigorous and the grapes – about six weeks from harvest – were healthy, showing no sign of disease or infestation. While many of the nearby vineyards were neater and more terraced, the vines planted in rows, those of Tetramythos’s that we saw appeared more natural, even a little unkempt, and followed the natural lay of the land. Panayiotis discussed the composition of the mostly limestone soil, the need for irrigation and the challenges and rewards of farming organically in the area (Tetramythos is one of the few estates to do so). 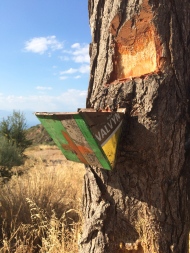 The sun was intense and the temperature hot, yet due to the low humidity and constant breeze, rambling through the vineyards and along the ridge lines in search of ever more stunning views was a moment of bliss. Lost in a golden landscape, bathed in golden light, it was hard not to be agog at range of geography and micro-climates we had encountered during our short tour of the Peloponnese. Whether you’re looking for beaches, mountains, forests, barren rockscapes, large cities, tiny villages, history, art, wines, food, high-end experiences or low-, the peninsula has it all. As a tourist destination, it must rank among the top in Europe. 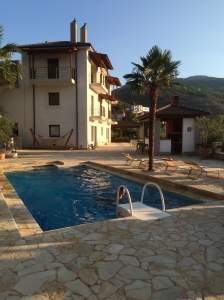 After a tour of the Tetramythos winery, we returned to the van and were driven to our lodging to deposit our suitcases and prepare for the evening. In addition to its vineyards and winery, Tetramythos owns an inn, located near the winery, and a small complex of so-called studios further up the road. We spent the night in the latter, a trio of two-storey, four-unit buildings. My apartment had a small living room with a wood-burning fireplace, a kitchenette, a bedroom with a comfortable queen-size bed, a bathroom with a shower and tub and a balcony in back, off the bedroom, that had sweeping views over the village and down the valley. In early July, we were the only guests, though they are reportedly full during ski season. 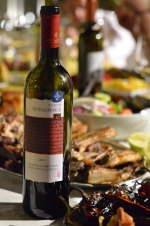 A short while later, we drove to the inn for a hop in the in-ground pool, a tutored tasting of Tetramythos reds and aged whites on a covered terrace perched on the valley side and an al fresco feast of meats and vegetables expertly grilled by the winery’s owners, including, once again, excellent lamb and lukaniko. The night air was warm and buoyant, the breeze caressing, the view stunning and the hospitality humbling. We didn’t want the evening to end but, of course, it did and we were soon collapsing into our beds, slightly dreading the early rise later that morning.